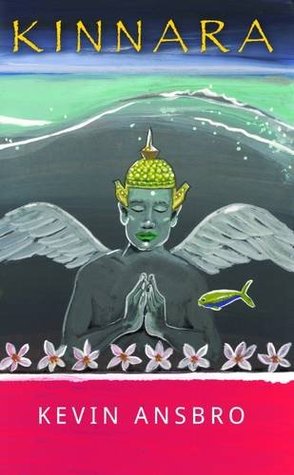 With a sharp, flowing, sarcastic, grotesque, simple style, set in a place such close to paradise, Kinnara is a story to read, laid down on a sofa, answering “in a moment” to everybody who calls you.

The words are easy, pictorial, and sharp, in a world of beauty and bizarre:

A detached human head rolled around in the water, like a fallen coconut. It was hard to imagine that, more than two metres beneath this spiteful torrent, were the manicured lawns of the hotel grounds.
***
Hannah and Calum were shown to their table, while some of the restaurant’s seated guests peered over like inquisitive meerkats.
***
Many foreigners had celebrated their Christmas festival the day before. One of them, wearing a Tottenham Hotspur football shirt, had partied right through into the daylight hours and was only now traipsing back to his hotel. Sawat grinned as the man shambled past like an extra in a zombie movie. The guy walked as if he were holding onto an invisible zimmer frame. Searing sunlight clawed at his scrunched eyes and one of his unresponsive legs dragged along the hot pavement as if attached to a ball and chain.
***
Removing his top was easier said than done, given that his left shoulder was useless.
***
Hannah pressed her forehead against the window. The
sea was pistachio green and a steamy mist rose from dense
canopies of trees. Some of the smaller beaches resembled
elephant tusks.
“Wow, it looks like paradise,” she cooed.
***

Marvin rolled his eyes, in resigned anticipation. “OK, so here’s a typical example of how my wonderful husband stampedes through life like a bull in a haystack…”
“I think you’ll find that’s a mixed metaphor,” Marvin
interrupted.
“I’ll mixed-metaphor you if you keep butting in!” she
barked.
***
After securing the speedboat, they scrambled to the sanctuary of an abandoned water-sports shelter beneath a cluster of palm trees at the rear of the beach. By the time they reached the shelter, torrents of water were cascading from its roof, and a silty estuary of fast-flowing rainwater had formed in a ditch that bisected the sand. As white flashes of lightning X-rayed the coconut trees, a lame beach dog, also seeking shelter, looked at them through doleful eyes, as if seeking reassurance.
***

As the speedboat skimmed the waves heading for that
inky lozenge of mysterious water, Calum looked back
towards land. When viewed from the sea the white walls of the hotel, with its colonial-style columns and its cherry red parasols, looked magnificent. He could clearly see the sculpted hedges and the tall coconut trees, some of which had been planted to replace those destroyed by the Boxing Day tsunami in 2004.
Pretty soon the hotel diminished in size and the shoreline stretched out into a narrow strip of gold, beyond which were the dark hills that loomed over the town.
The sea, when viewed towards landfall, was a swathe of changing blues: azure, cobalt through to a velvety turquoise. When Calum switched his position to squint in the direction of the sun, the water morphed into a blinding sheet of glimmering zinc.
***

The story is rolling along romance, magic and travel using all kinds of conflicts: conflict with nature, conflict with the other, and last but not least self-conflict. And all these conflicts are as simple-plotted as they could be.

The story employs all the beauties and expressions in hand, and it uses them very well. There are very simple paragraphs which make the reader easily lie inside the world of the story.

===Spoiler===
It is shocking enough to read that

… he heard a distant rumble – louder than thunder. Looking out to sea, Sawat saw a grey wall of water the width of the horizon, tumbling at high speed towards the shoreline. Some of the foreigners acted quickly, snatching their children and running towards the hotel; others stood like statues, mesmerised, not yet knowing the danger they were in. Sawat and most of the other beach vendors rushed to help the frantic tourists but before they had enough time, the demonic sea was upon them. Now it was white, and it was deafening. It swamped the screams of everyone in its murderous path.

But it will be more and more shocking if you have read all that very well written chapter which ends in that tsunami, making you feel calm, enjoying the sunlight and not really waiting for something to happen, even if the earth tremble!

Halfway through his breakfast, Sawat felt the ground tremble beneath him and looked at Mae to see if she’d also noticed. Shortly afterwards there was another, more noticeable, judder. This time the food stand shook like a rail track in the path of an oncoming train. Stacks of plates and sweaty pan lids rattled as if disturbed by a mischievous spirit; bunches of fresh coriander leaves swung on their hooks like green pendulums. The mini quake stopped almost as soon as it had started.

I have some questions by the way, but none of them, makes me hesitate or even think twice before recommending the book to whoever wants to enjoy a story, which does have a story to tell!

About “Italian Shoes” by Henning Mankell